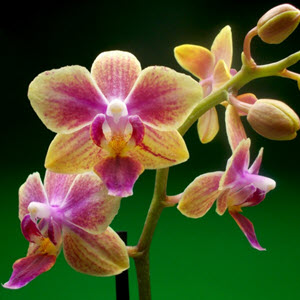 The subdivision into class brings about the gymnospermae, mostly consisting of trees and shrubs, and the angiospermae representing the greatest diversity of plants with adaptations for the majority of habitats. Structurally, the gymnosperms have much simpler xylem vessels than the more complex system in the angiosperms, and flowers are unisexual producing naked seeds. The angiosperms usually have hermaphrodite flowers, which produce complex seeds (see p103), inside a protective fruit.

Conifers (Coniferophyta) are a large division of many hundred species that include the pines (Order - Pinales) and yews (Order - Taxales). Characteristically they produce 'naked' seeds, usually in cones, the female organ. They show some primitive features, and often display structural adaptations to reduce water loss (see Figure 9.2). There are very many important conifers. Some are major sources of wood or wood pulp, but within horticulture many are valued because of their interesting plant habits, foliage shape and colours. The Cupressaceae, for example,

Figure 4.3 Yew (Taxus baccata) with berries - a conifer includes fast growing species, which can be used as windbreaks, and small, slow growing types very useful for rock gardens. The yews are a highly poisonous group of plants that includes the common yew (Taxus baccata) used in ornamental hedges and mazes. The division Ginkgophyta is represented by a single surviving species, the maidenhair tree (Ginkgo biloba), which has an unusual slit-leaf shape, and distinctive bright yellow colour in autumn.

Flowering plants (Division -Magnoliophyta) have a flower structure for sexual reproduction producing seeds protected by fruits. This characteristic structure is used as the basis of their classification. There are estimated to be some 25 000 species, occupying a very wide range of habitats. Many in the division are important to horticulture, both as crop plants and weeds. This division is split into two main classes; the Liliopsida formerly the Monocotyledonae and generally known as the monocotyledons, and the Magnoliopsida, the dicotyledons. The main differences are given in Table 4.3.

Parallel veins (a) e.g. most monocotyledons

Table 4.3 Differences between Monocotyledons and Dicotyledons

Parallel veins (a) e.g. most monocotyledons f If

(a) monocotyledon and (b) dicotyledon

Table 4.3 Differences between Monocotyledons and Dicotyledons

Monocotyledons include some important horticultural families, e.g. Arecaceae, the palms; Musaceae, the bananas; Cyperaceae, the sedges; Juncaceae, the rushes; Poaceae (formerly Graminae), the grasses; Iridaceae, the irises; Liliaceae, the lilies and the Orchidaceae, the orchids.

Dicotyledons has many more families significant to horticulture, including Magnoliaceae, the magnolias; Caprifoliaceae, the honeysuckles; Cactaceae, the cactuses; Malvaceae, the mallows; Ranunculaceae, the buttercups; Theaceae, the teas; Lauraceae, the laurels; Betulaceae, the birches; Fagaceae, the beeches; Solanaceae, the potatoes and tomato; Nymphaeaceae, the water lilies and Crassulaceae, the stonecrops. Four of the biggest and most economically important families in this class have had a change of name. Fabaceae (formerly the Leguminosae), the pea and bean family, have five-petalled asymmetric or zygomorphic (having only one plane of symmetry) flowers, which develop into long pods (legumes) containing starchy seeds. The characteristic upturned umbrella-shaped flower head or umbel is found in the Apiaceae (formerly the Umbelliferae), the carrot family, and bears small white five-petalled flowers, which are wind-pollinated. The members of Asteraceae (formerly Compositae) have a characteristic flower head with many small florets making up the composite, regular (or actinomorphic) structure, e.g. chrysanthemum, groundsel. Members of the Brassicaceae (formerly Cruciferae) are characterized by their four-petal flower and contain the Brassica genus with a number of important crop plants such as cabbage, cauliflowers, swedes, Brussels sprouts, as well as the wallflower (Cheiranthus cheiri). Most of the brassicas have a biennial growth habit producing vegetative growth in the first season, and flowers in the second, usually in response to a cold stimulus (see vernalization). A number of weed species are found in this family, including shepherd's purse (Capsella bursapastoris), which is an annual. Many important genera, e.g. apples (Malus), pear (Pyrus) and rose (Rosa), are found within the Rosaceae family, which generally produces succulent fruit from a flower with five petals and often many male and female organs. Many species within this family display a perennial growth habit (see Table 4.4).